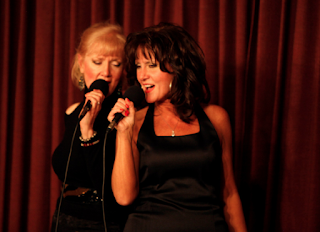 What inspires your music? What is your story?

Since we are sisters, our first inspiration was during our childhood when we LOVED and continually sang and performed together.  Our mom, an accomplished opera singer, her brother a doctor of music, our aunt another doctor of music, and cousins are all either musicians, singers or dancers.  It is in our blood.  Diana, a classically trained musician (a College of Wooster Grad with a Degree in Music & Vocal Performance) played the piano, and accompanied Elissa's many instrumental, vocal and dance solos. We both studied piano under the late, great concert pianist Marianne Mastics.  Our childhood living room was our very first "stage" as we amused ourselves for hours performing along with recordings and television variety shows.  Little did we know that through the years, and summers performing at The Cleveland Playhouse, Oberlin College Summer Opera Theatre (Elissa was accepted at the age of 9, and Diana accepted as a teen), and Cleveland Institute of Music opera productions, we’d develop our own unique interpretive style.
As life would have it, and the years passed, we never thought we would be performing professionally.  However, about 6 years ago, we sang 3 songs at a wedding, including The Prayer.  When we sang our last note, the entire congregation stopped the wedding ceremony by standing up and giving us a standing ovation!  After the ceremony, about 50 people came up to us and asked where they could purchase our CD.  Now, we were quite surprised (deer in headlights) at that request, since we thought of ourselves as simply sisters singing at a wedding.  That’s when we realized and said to ourselves, “I guess people like us! And maybe we should pursue our singing further!”
And as luck would have it, Elissa’s friend’s husband, Pablo “Chino” Nunez, (JanMar Productions, Inc.) happened to be a Grammy Award Winning music producer, musician and arranger.  When he heard that we sang, he wanted to hear us for himself.  After listening to our rendition of The Prayer on-line, he asked us to come down to his recording studio in West Palm Beach.  He wanted to meet us and hear us live.  Chino was interested in producing our debut album.  So we hopped on a plane and flew down to audition for him.  We stood in front of him in his office from 10 in the morning until about 4 in the afternoon singing practically every song we knew.  He just sat in his chair and listened. When we sang The Prayer, he had tears in his eyes.  He was blown away.  He said our harmonies (since we are siblings) are unbelievably tight, and we sound like the same person.  He could not tell who was singing which part!  He was so inspired, that he wrote an arrangement of The Prayer just for us to record on our album.
He signed us to a record deal on the spot, but the catch was…we would have to write 5 original songs for our album.  Needless to say, the thought was a little daunting, but very exciting! So, on the plane while flying back home to Cleveland, we wrote the lyrics to “Daddy Hold My Hand”, the first track on our Album (Embrace Abrazo Abbraccio).  (The album title is the word Embrace in English, Spanish and Italian).  “Daddy Hold My Hand” (video: https://youtu.be/Qi1jyExMgJ0) is about our father who passed away at the age of 48.  Dad was our biggest fan, so he was a huge inspiration.  Our first public performance had our audience in tears by the time we got to the refrain.  What a feeling!
After we wrote “Daddy Hold My Hand”, the flood gates opened! We couldn’t stop writing, and Christmas Garland (“Merry Christmas” in 6 languages with 2 simultaneous melodies) was the love child of Diana.  Elissa thought, “What a great idea!”.  The languages wrap around the world, just as garland wraps around a Christmas tree. Then, we decided to produce a music video, and Elissa added, “We should wear the clothes native to the countries we represent in the song: United States, Italy, Spain, Germany, Serbia and France!”
DeLissana have a fun time in this quirky Christmas Music Video
After recording our album, Chino, a Grammy Board Member, felt it was worthy of submitting to The National Academy of Recording Arts and Sciences (NARAS) for a shot at a Grammy. We were voted onto the Grammy Pre-nomination list right out of the gate!

What makes your music extraordinary and different?

The fact that we are sisters (a family act) is different.  Since we are siblings, (mature; not 20 years old also makes us unique), our voices blend perfectly.  Given that our precision is one of our huge strengths, we could be singing 100 feet apart, and we will have the identical inflection and be at the exact same place in our music.  We read each other so well.
After having the opportunity to perform at various venues, we feel strongly that there is an audience for us.  We are always received well, since appealing to all ages has been our experience.  Kids have danced in the aisles, and couples have danced the jitter bug during our rendition of Boogie Woogie Bugle Boy.  It is apparent to our audiences that we are having a ball while performing together.  We have a knack for making our audiences laugh!

What are your plans for the upcoming year?

We are always researching and looking for new opportunities and gigs, and are currently in the process of exploring the idea of performing for House Concerts as well.  We are fearless and will sing for anyone. We are not kids, so we are focused on our passion.
"Like so many musicians, we run into roadblocks every day,
but we are not giving up."
To have our songs placed in a movie, or in a television commercial or series would be a dream come true.  And a European tour is definitely on our bucket list.  We saw Il Divo’s televised concert in Spain, and were awestruck.  We looked at each other and said, “We can do that! We are good enough!” 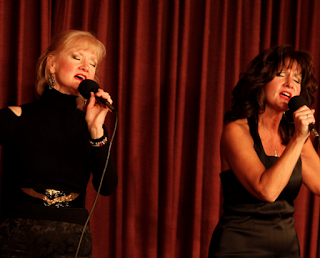 One of our true honors has been performing for our Military.  As singers/ musical directors of The Patriot Tour, we were deeply honored to have performed in the fabulous variety shows for our brave service men and women and first responders.  In addition, we were asked to appear at a benefit for our fallen police officers and first responders at the Improv Comedy Club in Downtown Cleveland.  Performing in The Patriot Tour for our United States Marines at Camp Lejeune, North Carolina (February 2012) to benefit "Hope For the Warriors" was humbling and a dream come true.  Singing "The National Anthem" at several Cleveland Indians games has been an amazing opportunity as well!  We have performed coast to coast: in December Nights in San Diego's beautiful Balboa Park, at Cleveland's New Orleans Showboat, Barton Center in Lakewood, The Funny Stop Comedy Club in Akron for the U.S. Marines, Prime at Anthe's Lounge in Akron, Becky's Bistro in Willoughby Hills, Festa Italiana in beautiful Cuyahoga Falls, Angelo's Nido Italia Restaurante in Cleveland's Little Italy, the Lake County Rotary Ball Charity Auction and as featured guest performers for other events.

I Fall to Pieces (cover):  https://youtu.be/CyUyWrdo74k

September 28, 2007
Top 10 Mistakes When Writing for Percussionby Sabrina Young
10. Indicating the wrong mallets for an instrument.Brass mallets on vibes? Try a hammer on a violin!


9. Writing the glockenspiel part as heard.You shouldn't have to climb a ladder of leger lines to read a glock part. Keep it in the staff.

8. When in doubt, adding more suspended cymbal.This is a huge mistake made by arrangers. Yep, cymbals add automatic intensity to a piece, but so can a bass drum roll, a rousing hand drum part, exciting mallet licks, or a hundred other combinations. Well-written percussion parts stand out in the band and church repertoire.

7. Better means more complicated, right?This is my main mistake. A percussion part can be simple enough for a middle school, but it is the ability to use the different tone colors of the percussion palette properly that indicates a maturity in writing, not that impossible part for the timpanist that has them playing timpani, gong, crash cymbals, and triangle in the span of…
6 comments
Read more

Music Industry Insider: 50 Ways to Make Money as a Musician

August 27, 2014
50 Ways to Make Money as a MusicianWant to have a musical career but not sure how to make money as a musician in today's market? Well, first you need to redefine your goals as a musician and realize that like any job, being a musician involves a lot of work, perseverance, and talent. And in today's Digital Age, you need to be able to combine your skills to help you make a living as a musician. You will probably need to select at least a dozen forms of income and micro-incomes in order to make a full time living as a musician or choose a primary steady gig and add on other projects (what most musicians have done for centuries).

Each method of making money has a $, $$, $$$ or S for work that will make you a little pocket money ($), possibly significant money - hundreds to thousands ($$), at least part time or possible full time work ($$$), or is steady work (S). Notice that none of these options involve making millions of dollars so you can drive around in a diamond-crusted limo…
5 comments
Read more

May 18, 2007
INSTRUCTIONS: Use your computers "FIND" feature to locate artist names in this document.

This is a short BIO list I made for my thesis "The Feminine Musique: Multimedia and Women Today" in 2005. It is a shortlist of bio info on composers and artists involved in interdisciplinary media work, with an emphasis on new music. References to specific web pages are given. The thesis can be checked out through interlibrary loan at Florida International University. I plan to post most of the information of my thesis online in time.

http://www.aec.at/de/archiv_files/19991/1999_440.pdf
Rebecca Allen (USA) is an internationally recognized media artist, inspired by the potential of advanced technology. Central to her work is the study of motion as a form of communication and creative expression. Allen has produced a number of commissioned works in Europe and the U.S. including computer animated films, interactive installations and large-scale multimedia performances. H…
Post a Comment
Read more
Follow @dalatindiva