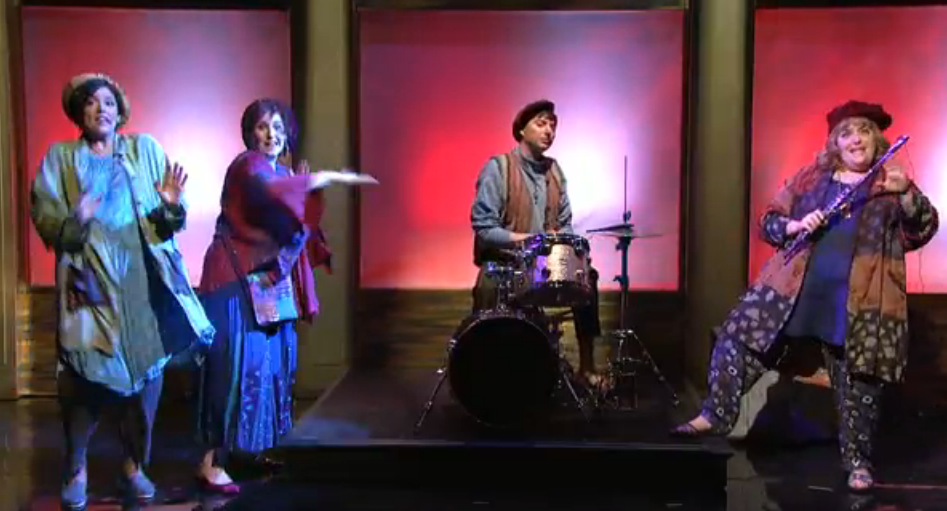 Saturday Night Live lovers, who typically no longer watch Saturday Night Live on Saturday but
actually wait until Monday when it pops up on Hulu, enjoyed a rare hilarious bit from the "What's Poppin" skit, featuring a few, uhm, lets say non-traditional "hip hop" artists scatting away. Within a few minutes it's pretty clear that the performing musicians aren't what you would call mainstream hip hop artists, wearing strangely coordinated wardrobes and sporting a hip hop flute.


Composer Janice Misurell-Mitchell is the inspiration behind this hilarious take on hip hop.

You can watch the original version of Scat/Rap Counterpoint here, starring Misurell-Mitchell:

According to the composer:

"Scat/Rap Counterpoint presents various views of the dilemma in which American artists find themselves when they try to relate their work to their society. The issues are presented in the form of a rap dramatized by nine different characters, some of whom are treated seriously, and some, satirically..."
From the composer https://www.youtube.com/watch?v=ZaGm0OvxTss

So what you do you think about Scat/Rap Counterpoint? While this may seem like a kooky take on rap, or maybe an educator's way of making music accessible to a wider audience, the musicians in the video are no neophytes to music. In fact, Misurell-Mitchell is a member of the School of the Arts Institute in Chicago, and has had many accolades for her virtuosic flute playing and innovative style. You can find out more about the quirky talented composer at her website.

------
Written by Sabrina Pena Young, Composer
Young is a sought after writer and speaker on music technology, electronic music, and contemporary music. Her latest work, Libertaria: The Virtual Opera, has been described as "breakthrough opera" and "epic" by the Palm Beach Arts Paper. Contact Young for your upcoming event, commission, or publication at spenayoung@gmail.com .

May 11, 2019
Top 5 Tips for Film Festival Submissions in 2019  You just finished your film! So now what? Sure, you can show your friends and family, even put it up on YouTube. But why don't you try getting it out to a much wider audience? Indie filmmakers and student filmmakers can have their movies shown around the globe at film festivals. Film festivals run the gamut of red carpet affairs like Sundance and Cannes to more local events, online festivals, and university-led events. For example, in Buffalo, there are a number of incredible film festivals like the Buffalo Dreams Fantastic Film Festival (a local film fest that has a special love for all horror and science fiction), the NCCC Film and Animation (a great venue for students and local film networking), and other film festivals like the Buffalo International Film Festival and the 48 hour Film Festival.  The 48 Hour Film Festival is a worldwide phenomenon where filmmakers get together and create a film in, you guessed it, 48 ho
Post a Comment
Read more

How to Make a Movie : The Lowdown on Filmmaking

April 19, 2019
How to Make a Movie We all love watching movies. Learning how to make a movie doesn't have to be that difficult. Sure, it's a lot like trying to juggle oranges and chainsaws convincingly. But overall most folks absolutely LOVE the filmmaking process! So let's cover some of the basic steps. We'll assume you already have a great story and script. If not, then check out my Filmmaking Crash Course for some great writing exercises. Get a Camera Now you might say, "Well, I know how to make a movie, but I don't have a camera." Don't worry. When I say camera, I mean any sort of device that shoots video or film. These are all cameras: Smartphone Camcorder Your Granddad's Super 8 A Laptop Tablet Okay, I know the purists are going to say that you need an incredible cinematic camera that shoots 4K and costs thousands to make a good high-quality film. But the truth is that most of us are not trying to win an Oscar, we are trying to tel
1 comment
Read more