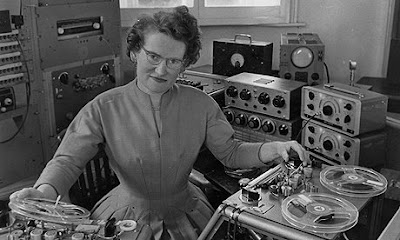 When does electronic music history begin?

Many argue that the history of electronic music began with the invention of the record player in the 1870s. Certainly the invention of the phonograph by Thomas Alva Edison. Yes, the same Edison who invented the lightbulb. The record player allowed music lovers to enjoy a concert without leaving their living room! Of course, the music establishment worried that the record player would reduce overall sales, but instead record players allowed further expression of ideas. Not only could music be distributed internationally, for the first time in history, music could be preserved and archived for study.

There were a number of early electronic instruments from the 1900s. Among them were the Theremin (still in use today), the Ondes-Martenot, the Trautonium, and the Hammond Organ. Each of these instruments brought musicians one step closer to digital explosion of the late 20th century.

There were a number of notable electronic composers during the early part of the 20th century. Many of these composers embraced the concept of noise equals music. Often cited as one of the founders of electronic music, composer Edgard Varese experimented with percussive sounds to create the work "Ionisation" in the 1920s, which set the musical groundwork for experimental sound and composition.

As you listen to Ionisation, think about the similarities between electronic sound, timbre, and the sounds of the percussion instruments.

Notable Electronic Composers of the Early to Mid-20th Century

Elektronische Studie II—the first electronic piece to be published as a score.
http://www.youtube.com/watch?v=hXqvBvOXV3U

Iannis Xenakis
Famous for electronic work, but most famous work was for orchestra "Metastasis" which had many electronic music components and sounds.
http://www.youtube.com/watch?v=SZazYFchLRI
Much of his work was based on mathematical principles or

If it seems that much of this music sounds "sci-fi" to you, this is directly due to the fact that the evolution of electronic music correlated with growing excitement for the space race, aliens, and science fiction movies like Forbidden Planet, which had an electronic score by Louis and Bebe Barron.

September 28, 2007
BUY COMPOSER BOOT CAMP BYSABRINA YOUNG TODAY Top 10 Mistakes When Writing for Percussion by Sabrina Young 10. Indicating the wrong mallets for an instrument. Brass mallets on vibes? Try a hammer on a violin! 9. Writing the glockenspiel part as heard. You shouldn't have to climb a ladder of leger lines to read a glock part. Keep it in the staff. 8. When in doubt, adding more suspended cymbal. This is a huge mistake made by arrangers. Yep, cymbals add automatic intensity to a piece, but so can a bass drum roll, a rousing hand drum part, exciting mallet licks, or a hundred other combinations. Well-written percussion parts stand out in the band and church repertoire. 7. Better means more complicated, right? This is my main mistake. A percussion part can be simple enough for a middle school, but it is the ability to use the different tone colors of the percussion palette properly that indicates a maturity in writing, not that impossible part for the timpanist that
6 comments
Read more

May 18, 2007
INSTRUCTIONS: Use your computers "FIND" feature to locate artist names in this document. This is a short BIO list I made for my thesis "The Feminine Musique: Multimedia and Women Today" in 2005. It is a shortlist of bio info on composers and artists involved in interdisciplinary media work, with an emphasis on new music. References to specific web pages are given. The thesis can be checked out through interlibrary loan at Florida International University. I plan to post most of the information of my thesis online in time. Rebecca Allen http://www.aec.at/de/archiv_files/19991/1999_440.pdf DOWNLOAD COMPOSER BOOT CAMP BY  SABRINA YOUNG TODAY Rebecca Allen (USA) is an internationally recognized media artist, inspired by the potential of advanced technology. Central to her work is the study of motion as a form of communication and creative expression. Allen has produced a number of commissioned works in Europe and the U.S. including computer animated films, i
Post a Comment
Read more

March 16, 2016
Music theory students and teachers can benefit from additional learning from online resources. Today's student is used to interactivity and multimedia, and these music websites can help augment the usual classroom fair, whether you are teaching elementary music or basic theory for college freshman. Most of these theory websites provide user-friendly lessons with colorful illustrations, and a few even provide online exercises.  Musical U Musical U is an online community that provides ear training and music theory expertise, detailed lesson plans, examples, free practice audio, and more.  Ricci Adam's Music Theory.Net Ricci Adam's Music Theory.net is my favorite online music website. Not only does the online music site provide lessons in everything from basic intervals to Neapolitan chords, there are also a large number of exercises. Additional utilities include a chord calculator and a matrix calculator for serialism lessons. Additionally, there are basic exercis
1 comment
Read more
Follow @dalatindiva