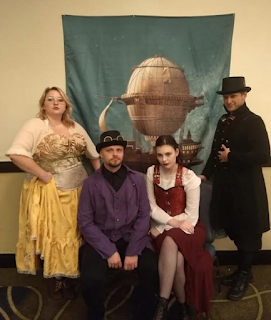 New Music Resource was excited to interview exciting musical theater playwright and director Gretchen Suarez-Peña about her latest musical theater production: Melina A Steampunk Musical Tragedy. Gretchen Suarez-Peña is a long-time playwright and lover of the theatre. She has been acting, directing, and writing plays since her teenage years. Her most recent success was winning overall best full-length play at the 2018 Tampa Bay Theatre Festival for her show Conversations in the Car.

NMR: How did you start in musical theatre? What inspired you to follow this path?

I've been involved in musical theatre since I was a kid. I loved the theatre, acting, singing, and acting in middle school and high school. I participated in every thespian competition and community theatre production I could at that time and into college and early adulthood. I started writing, directing and producing plays in High School and I knew that was my true passion.

NMR: Melina took over a decade from concept to finally entering production. Tell me a little about this process.

In 2006, while listening to the song, Helena by Nickel Creek, I suddenly envisioned a man with a top hat and Victorian attire declaring his love to a girl that was sweet and coy, but not at all what she seemed. Her sweetness was her manipulative charm and he was leaving his current love to be with her only to realize that he would later be left alone. It wasn't until 2009 that I started the script, it was a way to deal with unrequited love. A guy I had dated a long time before had dumped me and I really felt like I had no closure from the situation even though I was married. His memory became a bit of boogie man in my life. Writing the script became a way to deal with it.

That original script was a short straight play, more or less what the first act of Melina is today. But I always knew I wanted it to be a musical. I put the script away for many years, I brought it back out in 2016 when I began writing again. This was also after I had discovered the genre of steampunk and the man in the top hat came back to me. In 2018, the story grew and expanded and I found that my original premise, still there, had grown.

Time had passed, children and new loves were now part of the story and the classical ideas of manipulation, paying for our parents' sins, and regret grew into a story I like to call Shakespeare meets Greek Tragedy meets a splash of Jules Verne. I feel compelled to tell it now because I believe it’s a story many can relate to. First and foremost, I want to tell good stories and to entertain and I think it’s time we dug our teeth into another mythology, a tale that people leaving the theatre will turn over in their heads again and again and again. I can't say I can identify my process other than its inspiration meets planning meets opportunity.

NMR: What is Melina about? 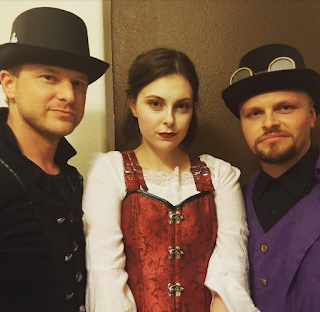 In the fictional steampunk town of New Comen, Jacob is the highly esteemed heir to the "throne" who is in love with a lower-class girl named Mara. Mara is an aspiring vocalist that has gained the favor of the town despite her status. Their love is one of the fairy tales until Melina enters the scene. Melina sweetly wins Jacob's attention and he ends up falling for her and leaving Mara.

Mara is heartbroken over losing her first love until she meets Jeremiah, an artistic manager who promises her the world. However, Melina’s affection for Jacob begins to wane and she ends up leaving him the day Mara weds Jeremiah. Melina eventually returns having given birth to Jacob’s daughter. Disgraced and hoping to restore his place at his noble family’s estate, life takes unexpected twists as the fate of Jacob’s daughter, a talented inventor, and Mara’s son, a talented vocalist himself, become intertwined. There are twists and turns and not everything is what it seems

NMR: What inspired your story for Melina?

That's mostly in answer to question 2 but some inspirations are: personal experiences and people in my life. The songs Helena and Reasons Why by Nickel Creek, My Immortal by Evanescence, Forget About it and Lucky One by Allison Kraus. Also archetypes in Greek tragedy

NMR: Tell me more about your collaborators on this project, the cast/composer, etc.

My last musical was entitled Martha and Mary and was orchestrated by Jonatha Gautier. Jonathan Gautier is a long-time musician and composer. He is a recording artist-producer and owns his own recording studio in Lakeland, Florida. Tyler Anderson is a college student currently working on his music education degree. He is an avid musical theatre performer and composer. He is the musical director of a college acapella show choir group and also composes music for their production.

I write the lyrics and melody line and they orchestrate around it. My workshop cast is a group of actors who will be helping table work the production. They include: Alyssa Yates, Dion Spires, Jacob Reilly, Gabrielle Wood, Ashley O'Connor, Eric Sanchez, Chad Sell, Julie Newton, Logan Harris, Lisa Negron, Omar Negron, Edel Nazario, Destiny Velez, and Haylee Rowland. I'd also like to give a shout out to a few big supporters and readers of the script Stephanie Lazanowski, Austin Lazanowski, Tony Murvin, Kimber Wiggs, Glori Snow, Alan Pena, Sean Grennan and many more that have read the script and provided comments and feedback to make the script even better.

NMR: How can readers support your project?

Liking my Facebook Page Plays by Gretchen. Melina is the biggest project I have undertaken but it is not my first. If you love theatre supporting my page as a playwright is huge. Giving and supporting the Kickstarter to get the demo album recorded so I can submit to competitions and festivals.

I really would love people to consider supporting new and different works of theatre. I love remakes and jukebox musicals but I really feel like there are so many new and original works that really can pain the theatre scene in a new and engaging way and we can only do that by supporting one another.

---------
Sabrina Young is an award-winning composer and filmmaker. In 2019 the Buffalo Dreams Fantastic Film Festival awarded Sabrina Young the Lois Weber Award. She is a Cintas Foundation Composer Fellow. Her latest film Spiritus premiered this past August in Buffalo, New York.

May 11, 2019
Top 5 Tips for Film Festival Submissions in 2019  You just finished your film! So now what? Sure, you can show your friends and family, even put it up on YouTube. But why don't you try getting it out to a much wider audience? Indie filmmakers and student filmmakers can have their movies shown around the globe at film festivals. Film festivals run the gamut of red carpet affairs like Sundance and Cannes to more local events, online festivals, and university-led events. For example, in Buffalo, there are a number of incredible film festivals like the Buffalo Dreams Fantastic Film Festival (a local film fest that has a special love for all horror and science fiction), the NCCC Film and Animation (a great venue for students and local film networking), and other film festivals like the Buffalo International Film Festival and the 48 hour Film Festival.  The 48 Hour Film Festival is a worldwide phenomenon where filmmakers get together and create a film in, you guessed it, 48 ho
Post a Comment
Read more

How to Make a Movie : The Lowdown on Filmmaking

April 19, 2019
How to Make a Movie We all love watching movies. Learning how to make a movie doesn't have to be that difficult. Sure, it's a lot like trying to juggle oranges and chainsaws convincingly. But overall most folks absolutely LOVE the filmmaking process! So let's cover some of the basic steps. We'll assume you already have a great story and script. If not, then check out my Filmmaking Crash Course for some great writing exercises. Get a Camera Now you might say, "Well, I know how to make a movie, but I don't have a camera." Don't worry. When I say camera, I mean any sort of device that shoots video or film. These are all cameras: Smartphone Camcorder Your Granddad's Super 8 A Laptop Tablet Okay, I know the purists are going to say that you need an incredible cinematic camera that shoots 4K and costs thousands to make a good high-quality film. But the truth is that most of us are not trying to win an Oscar, we are trying to tel
1 comment
Read more